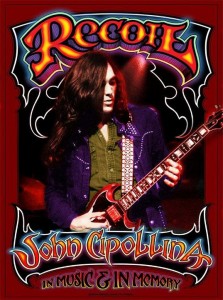 The long-out-of-print documentary on ‘John Cipollina- Electric Guitarslinger‘ directed by Jesse Block and Jim Draper shall soon be released for the first time on DVD. ‘Recoil,” a 3-DVD set box will include this documentary, and a lot of previously unavailable music and interviews.

John Cipollina: Recoil is a limited edition release, with a one-time only 2000 unit printing.

It can be purchased directly from the JohnCipollina.com website.